With a word as common as Wi-Fi, does anyone stop to think about what that word even means? I did not hear the word until I was out of High School. It took a time before the word caught on. I remember calling the earliest wireless systems the wireless or the wireless network. The technical name for a wireless network, at that time, was IEEE 802.11 Wireless Local Area Network. Quite a mouthful.

What does Wi-Fi mean? This is where the internet does its magic of telling many different stories, all of which tell a slightly different version of the truth. When I first heard the word Wi-Fi, there was a subconscious connection to the decades-old technology of Hi-Fi. High Fidelity is the name given to home stereo systems that came out in the 1950s and later. These systems were branded as Hi-Fi sets. This differentiated them from the cheap low-quality systems of early times. The term was used to signify the superior audio reproduction, low noise, little distortion and original recording clarity.

The Interbrand website clearly recognizes Hi-Fi as having been an inspiration for the word Wi-Fi. This makes sense to me as the word has a long history of successful branding in the United States. For people younger than a late tricenarian like myself, you might not remember that there was a time when a Hi-Fi set was actually a large piece of furniture proudly displayed in the living room by most families. Fine woodwork would disguise the inner workings of a stereo system and possible turntable. Later sets incorporated an eight-track tape player.

It could very easily be inferred that Wi-Fi stands for Wireless Fidelity. This is where things get contentious. (How appropriate.) There are many articles citing founders claiming that Wi-Fi does not stand for anything. It is just a made up word. This is where I bow out of these types of discussions. How many access points can sit on the head of a pin? All words are made up. Typically they are based on earlier words that are made up from early words. In any event, Wi-Fi is a word and it is here to stay.

After the brand name Wi-Fi was trademarked by WECA and began to see widespread adoption. The organization changed its name to the Wi-Fi Alliance. It continues with this name today. The Wi-Fi Alliance owns the trademark Wi-Fi.

In the common vernacular, Wi-Fi refers to a wireless local area network. It is most commonly used for accessing the internet.

-Do you have Wi-Fi?
-Will there be Wi-Fi when we get there?
-Will we have to pay for Wi-Fi?
-I am using my neighbor’s Wi-Fi.

The one I always love is, “What is your Wi-Fi password?” (Nails on a chalkboard.)

Millennials, I am talking to you. I love the fact that you think access to Wi-Fi is like turning the kitchen sink on for a glass of water. My network is a holy place. I have no idea what you are going to do if I let you have access to my network resources. Do you know what is behind my firewall? The scarier part is that they would just connect to it if I did not have a WPA2 passphrase on it.

Think about how different wireless is from wired due to the open channel and perception of anonymity. Could you imagine a friend or family member coming over and jacking into a switch in my network closet? What authentication do you use for 802.1X? What credentials am I supposed to use?

All kidding aside, the correct question is, “May I please use your Wi-Fi?”

This elucidates the truth that Wi-Fi is a utility in this day and age. It is used to connect people wirelessly to the network resources that their lives have come to revolve around. Wi-Fi is the lifeblood of modern society. Wi-Fi brings freedom to people who are tied into an ever-growing ecosystem of services.

My definition of Wi-Fi reads as follows…

Wi-Fi is wireless technology allowing people to freely move through their environment while maintaining access to resources supplying the needs of mind, body and spirit.

In the end, the technology is irrelevant. It is what Wi-Fi does for humanity that will ultimately sustain the word Wi-Fi well into the future.

Today I passed the CWAP exam. It feels great to have completed all three professional level exams.

I took a slightly different tact when studying for this test. Memorizing frame structure is not something that came easily. I read the book the first time. Then I read it again. After reading the first 5 chapters, much of it out loud to myself, I had the brilliant idea to record myself while I read it. I installed Voice Recorder on my phone and read chapters 6, 7 and 8 out loud. I then started back at the beginning and read chapters 1,2,3,4 and 5 while recording. I also recorded sound bites of the different frame structures and tables. I recorded the questions followed by the answer for all chapters as well. I listened to these recordings any time that was available.

The weekend before the exam, I read the book again while listening to my recordings. It was a lot to cram into a weekend, but it was well worth it.

I was able to use the Wi-Fi Analyzer Pro software we have for troubleshooting at work to practice analyzing frames in the protocol analyzer.

I will now focus my efforts on creating my CWNE Portfolio.

Today I passed my CWDP-302 test. I was very happy to have received a decent score. I prepared for the exam by reading the CWDP Certified Wireless Design Professional Official Study Guide. I was not sure what to expect on the exam as this book does not have the practice questions like other books. I found it helpful to have design experience from work. I found many of the questions to be subjective. I could have selected two answers and supported them both based upon a certain explanation. I would like to know which questions I missed so that I can understand the reasoning behind their selection of one answer over another.

I will now turn my attention to CWAP. It feels great to be one certification away from tackling the requirements for CWNE. I have scheduled my CWAP exam for March 27th. I like scheduling the tests one after another. It holds my feet to the studying fire. I have a feeling I will enjoy studying CWAP better than CWDP. I found CWSP to be very enjoyable. It was very specific whether an answer was correct. This is how security works. This does this. This does this. This is very different than that. In any event, I am incredibly grateful to be getting so close to a big goal. I look forward to consuming the content in the next course and experiences beyond. Skål!

I passed my CWSP-205 test today. I prepared for the test by studying CWSP Certified Wireless Security Professional Study Guide: Exam CWSP-205. My wife bought it for me for Christmas last year along with my CWNA book. I read through the book twice and underlined the key topics. As the exam day approached I found the bonus features to be incredibly helpful. I ran through each chapter individually until I could get 100%. Then I went through the bonus questions one batch at a time in the same fashion. Once I had gone through each of the individual tests I lumped all the questions together in the https://testbanks.wiley.com site for CWSP-205 and went through it a couple of times. I ended up getting close to the same grade on both the practice test and the official exam. I could have kept going over the questions shooting for 100% but was ready to test. Most of the test questions on the practice tests were the same questions as are in the book. I liked being able to do it electronically as it provided feedback and explanation without having to flip to the back of the book. Increased throughput.

I passed my CWNA exam last August. I am planning on taking the CWDP test in February. My goal is to pass CWAP in Spring and Summer. Then on to CWNE. Time to break out the CWDP book and get started. 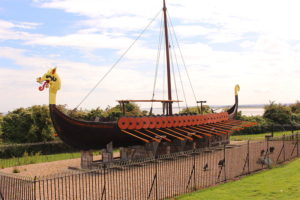 Today marks a momentous occasion. Wifi Viking has launched. I am continuing my education as an expert in 802.11 wireless communications. This site will be a resource for all those who wish to join me on a voyage of discovery. Follow me into the waves which allow us to navigate the world. At times there will be storms. At other times there will be clear sailing. Wifi Viking will protect and serve all those who clamor for adventure. Welcome!